Learn More About Who We Are

Explore what it would be like to work at Clozd, and browse our current job openings.

Learn how win-loss with Clozd will increase your win rate.

Learn how we automate win-loss, deliver actionable insights, and help you win more.

Let’s say you’re sitting in an executive staff meeting. An argument ensues about why your company is falling short of its aggressive sales target. Each functional head takes a turn. Some say it’s product shortcomings. Others claim that you’re charging a premium price for an average solution. Another asserts it's a sales training issue saying “most reps can’t articulate our value proposition.” Another references some bad press and how the company’s reputation has taken a hit.

After hearing the competing and sometimes contradictory explanations, the CEO turns to you and says: “We need actual data. Go figure out why we really win and lose.”

Where do you start?

What’s the best source to go to for win-loss data and insights?

In most companies there are only three potential data sources for win-loss analysis. Let’s look at each one:

For many first-timers, the immediate inclination is to mine the CRM. In some cases, they luck out because the CRM may have been designed to require sales reps to input a win-loss reason each time they close (win or lose) a sales opportunity.

At first glance, these first-timers think they’ve hit the jackpot. They say to themselves, “The data is there, now I just have to mine it.” Then they build a few pivot tables and throw together a powerpoint. Or, better yet, they try to impress the CEO with a live dashboard of win-loss data built in Tableau and integrated with the CRM. “It updates automatically,” they brag.

Unfortunately, the CRM might be the worst source of win-loss data.

The quality of CRM data is notoriously poor in the first place. According to Salesforce.com, a recent test of 24 companies found that 50% of the data analyzed was inaccurate. That’s astounding, especially coming from a CRM company.

What’s worse is that the win-loss reason has to be entered by the sales rep. One study found that sales reps were wrong about win-loss reasons more than 60% of the time. There’s a natural bias towards answers like “the product lacked functionality” or “our price was too high.”

Another issue with CRM win-loss data is that it lacks detail. Let’s say the data from the win-loss reason field is actually spot on and says you’re losing deals on price. Then what? You can’t take meaningful action without more detail. How high is too high? Are you always higher, or just for certain use cases or against certain competitors? Was the price high because you were including unnecessary modules or services? Clearly, a win-loss field in the CRM is insufficient and won’t enable meaningful action. You’ll still have to look elsewhere for more answers.

After ruling out the CRM, the next inclination for most first-timers is to collect win-loss feedback from the sales team, either through interviews with sales reps or via surveys. They think, “if anyone knows why we’re winning and losing, it’s the sales reps. They may not have entered all the details in the CRM, but I’ll talk to them and get the full story.” It’s not a bad idea, since the sales rep is definitely the one in the company that knows the most about the prospect’s evaluation.

But, any experienced sales leader can tell you that there are obstacles preventing the sales rep from having a complete and accurate understanding of why they win and lose deals. They’ll definitely get some things right; but, there is a lot that they’ll miss or misrepresent.

In the words of Bob Apollo, former EVP of Worldwide Field Operations at Sybase, “Asking the sales organization to self-report on wins and losses is as insightful as asking turkeys whether they might be inclined to vote for Christmas.“

Sales reps routinely exhibit strong bias (whether intentional or not) towards win-loss reasons that are outside their own control - like pricing or product functionality. There is also information that just isn’t available to them because the prospects don’t share it. Top-performing sales reps often admit that they don’t know the full story, especially for losses. That’s why top-performers often eagerly embrace an approach to win-loss that involves feedback from their clients and prospects. Top-performers want to know how to improve, and aren’t afraid to hear the feedback.

For all these reasons, and others, sales reps are typically wrong about why they win and lose deals 60% of the time. With that being the case, it’s easy to see that relying on the sales team as your primary source of win-loss data just won’t cut it.

Conclusion: You can’t rely on the sales team for meaningful win-loss insights.

After ruling out both the CRM and the sales team as potential win-loss data sources, there’s usually only one option left: the buyer.

It’s obvious, but the buyer is the one that actually knows why they made the decision that they made. B2B purchase decisions are complex with various decision factors playing a role, ranging from the obvious ones (like product features and pricing concerns) to more obscure ones (like internal politics and risk mitigation). The only reliable source for a holistic understanding of these factors is the actual buyer that had to make the decision.

Thus, companies that are serious about win-loss analysis realize that they have to base their win-loss strategy on feedback from the decision-makers at their won and lost accounts.

But, how do you go about collecting feedback from the buyers? The answer could be an article of its own. In fact, it is. For a step-by-step guide to conducting win-loss analysis, based on buyer feedback, check out Clozd’s Definitive Guide to Win-Loss Analysis.

Here are some highlights:

1. Use interviews, not surveys. B2B decision makers are more likely to participate in an interview (>30% of the time) than a survey (<5% of the time). They’ll also spend 20-40 minutes on a phone interview, while devoting less than 5 minutes to filling out a survey. Given these factors and the complexities of B2B purchase decisions, interviews are the only viable approach.

3. Share the findings widely. In-depth win-loss interviews will uncover meaningful insights for multiple areas of your business. If shared effectively, they can positively impact sales training and enablement, product strategy and roadmap, marketing content and messaging, corporate strategy and alignment, and more. Be transparent with the findings by publishing them for leaders across the entire business.

Conclusion: Buyers are the only reliable source of meaningful win-loss insights.

Taking a buyer-centric approach to win-loss analysis means you won’t be able to walk into the next executive staff meeting with a pretty dashboard that has all the answers. It will take time and effort to get there. You’ll have to teach the CEO and executive team that win-loss analysis should be an ongoing initiative based on frequent interviews with decision-makers at won and lost accounts. It will take some investment and time to start seeing the themes, but you’ll be confident that the insights are accurate and that resulting actions will drive meaningful ROI for the business. In the end, there isn’t a more important question for an executive team to answer than, “why do we win and lose?” 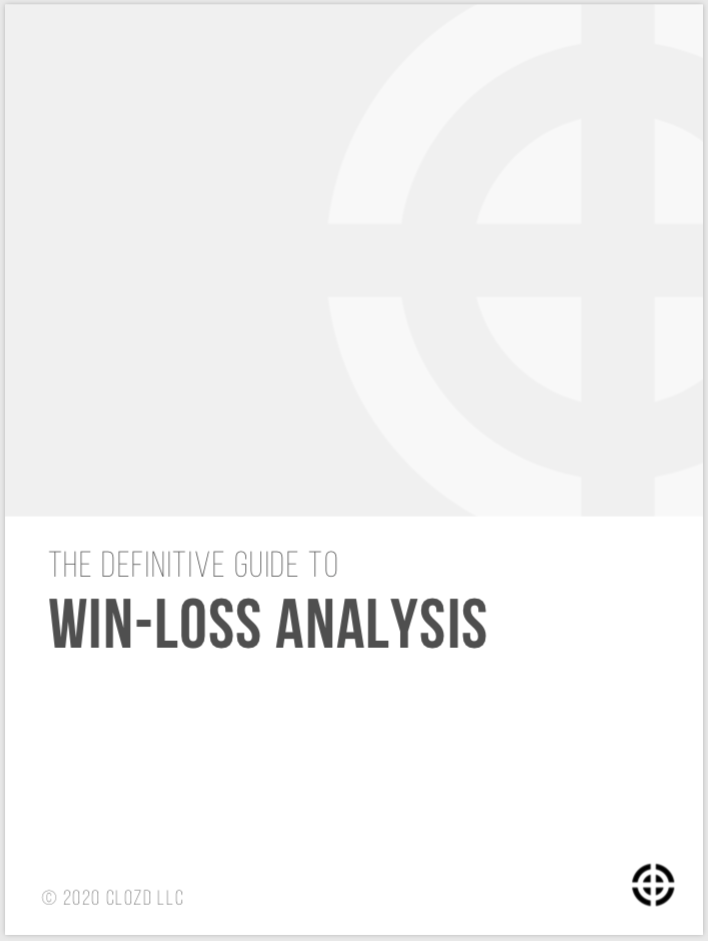 Three Tips For Getting Started With Win-Loss

The Best Source Of Win-Loss Data

Check Out Other Blog Posts

About UsCareersTalk With UsLog In

©2022 Clozd Inc.
By continuing to browse our site, you consent to our use of cookies. Learn More
Accept